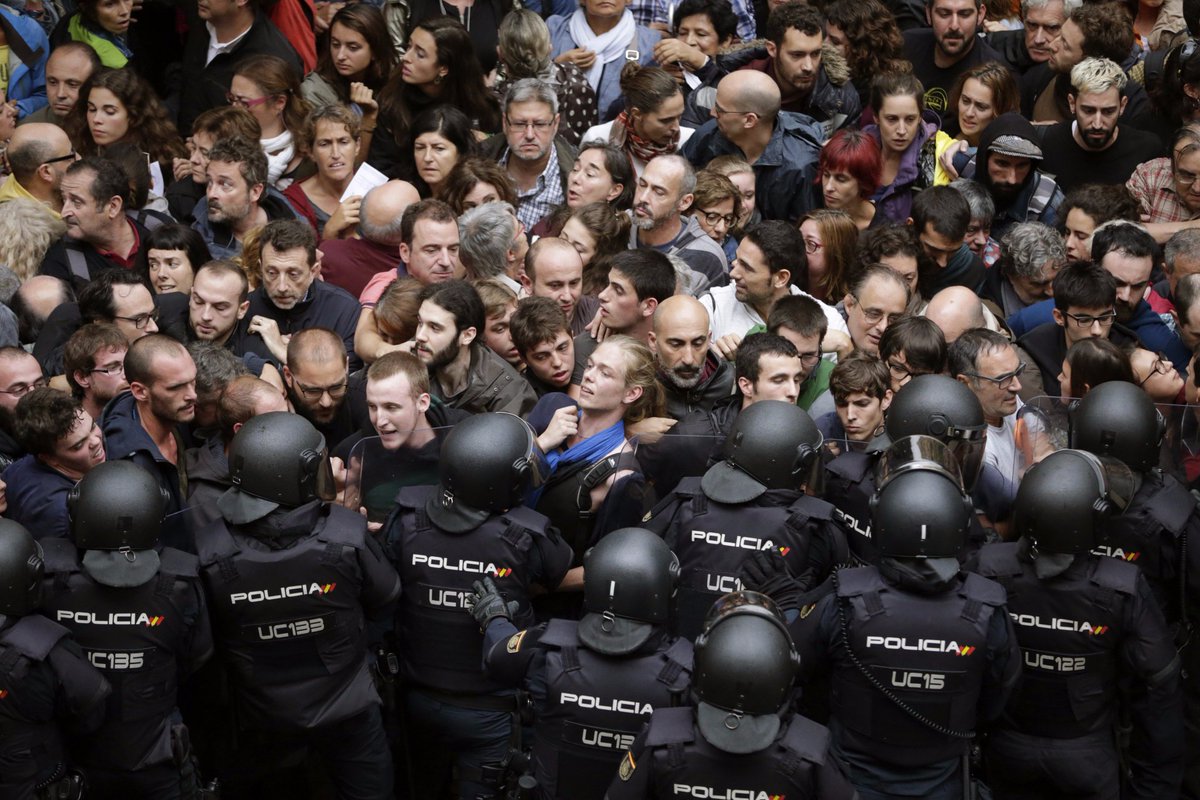 The brutality being meted out by Spanish riot police today is sickening and potentially deadly. There are countless videos on my Twitter feed of defenceless elderly people, young students, and even dogs being treated with inhuman violence by agents of the state.

This must be condemned unequivocally, if belatedly, by the Spanish government, which must realise that far from aiding their cause, this violence is doing nothing but strengthening a narrative that has surely already overcome its own political mandate.

With every blow of a club or swing of a riot shield, the fact that this referendum is nothing of the sort – that it is against the constitution, and illegitimate – recedes further into the ether. What is being attempted is unprecedented, and has parallels not with the Scottish independence referendum of 2014 – which was entirely legal and done with the full consent of the UK government – but with attempts by Milorad Dodik’s corrupt regime to wrench the Republika Srpska out of Bosnia and Herzegovina and shatter the fragile peace that still clings on through the increasingly threadbare Dayton Agreement which ended the war.

It is also clear that this is part of a larger geopolitical movement. The insidious veneration of ‘self-determination’ at all costs is not designed to empower, but to fragment. It is not surprising to read that Julian Assange and Edward Snowden contribute nearly a third of all traffic on the Twitter hashtag #Catalonia, with Wikileaks and Putin’s mouth-organ RT also highly active. (RT has also published plenty of pro-Dodik material, condemning the recently imposed US sanctions against him.) It is also notable that Twitter has made sure Assange is the beneficiary of an extra 140 characters, so that he can spew skewed, unconstitutional, a-legal nonsense like this:

Today in Catalonia we see that even voting is speech. To stop the vote, the Spanish state is aggressively trying to censor votes from being communicated. Free expression is the fundamental enabling right. From it all other rights emerge. Respect it. Defend it.

This kind of influence pops up wherever there is a chance to break apart the delicate structures that protect democracy and citizens. Wherever you look around the world at secessionist movements, Russian influence is growing. I have spent a lot of time in California this year, and people there are always shocked to hear that one of the prominent proponents of so-called #Calexit lives in Yekaterinburg. Let’s be clear: it’s not that these movements were started by the Reds under the Bed – they’re real, and have real support – but they are certainly supported, often with large sums of money and substantial political and media backing.

There’s also a clear link between such movements and the rise of other fringe nationalist groups – often manifesting through extreme conservatism, anti-LGBT campaigns, white supremacist groups, and more.

The breakdown of order in Catalonia is instructive. The masthead of the Washington Post claims that “democracy dies in darkness”. Rather, the massing examples of failed democracy – Brexit, Trump, and now Catalonia – show us that democracy dies in chaos. Media outlets such as the Guardian, which in its live reportage understandably takes the side of the protesters, describing their ‘peaceful defiance‘, are nonetheless failing to give this wider context. It is that failure that bolsters the kind of narrative Assange and his ilk want to spread.

The naive belief that democracy can ever stand still – that it’s ever stable – is being ripped apart by huge shifts in the world’s political landscape. Democracy is really fragile, and people have really short memories. The only way to protect it is to constantly reform it, and by doing so, enable government that acts in the best interests of as many of its people as possible.