One of the striking things about David Cameron’s much admired speech yesterday was the emphasis on the concept of “equality”. This was very much at the heart of the rhetoric: he promised to “finish the fight for real equality” and even went so far as to say that “you cannot have true opportunity without equality”.

Equality is undoubtedly a powerful concept. But it’s become a political cipher. And I mean that word in every sense: when a politician uses the word “equality”, it is simultaneously devoid of any meaning at all; a code that the politician’s supporters instinctively feel they can crack; and a method of concealment. The same can be said of words like “values”, “progressive” or – most problematically for my party – “liberal”.

Cameron himself acknowledged that he believes in equality of opportunity, but not equality of outcome. This is what enables the key elision in the most “centre left” section of his speech: that an “assault on poverty” is the same thing as tackling “the root causes of poverty”. If you read this part of the speech carefully, you can actually see the ghost of Lewis Carroll’s Humpty Dumpty hovering smugly in the background:

Central to [tackling big social problems] is an all-out assault on poverty.

Conservatives understand that if we’re serious about solving the problem, we need to tackle the root causes of poverty.

This is a revealing passage. To put it in the language of sophisticated political commentary, Cameron has things completely arse about face. Look at what he is saying: that the reason people are poor is because they have dysfunctional lives, health problems, or are actually guilty of criminal behaviour.

I’ll repeat that: to David Cameron, the root causes of poverty are the terrible decisions that people choose to make about their own lives.

Poor children in olden times. They probably should have worked harder tbh.

Or to boil it down still further: if you’re poor, it’s probably because you live a life that led inexorably to that outcome.

If you really believe this – as David Cameron claims to – then equality of opportunity is a meaningless concept; there’s no use trying to magically turn such bad, stupid, dangerous people into good, intelligent, virtuous ones.

Of course, he’s wrong. The root cause of poverty is – surprise! – people not having enough money.

Now, you might say that’s far too simple, and I’m making the same mistake that Cameron has, but from the other side. But if I’m right, then there would be lots of evidence suggesting that if you give poor people more money, their lives get better, yes?

And it just so happens that there is. In lots of countries across the world, governments have found – ASTONISHINGLY – that if you directly transfer cash into the hands of poor people, they… spend it on things that will make their lives better. And no, I don’t mean cheap booze and cigarettes – or even beer and bingo.

There are articles and studies which explore this phenomenon further.

But obviously, David Cameron isn’t just intending not to give the poor people in the UK more money. He’s already announced, via his sidekick George Osborne, that poor people will actually have money taken away from them. I’ve used this graph before, but it is kind of essential to understand the impact of the Budget on the UK population: 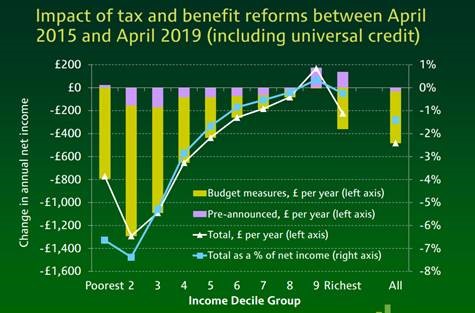 The Institute of Fiscal Studies, which produced the above graph, has also undertaken further analysis since then. This reaffirmed the fact that people on low incomes will be far worse off, even when you include all the random policies Cameron claims will alleviate the impact.

If David Cameron really wants an assault on poverty, and to ensure that there is equality – even just equality of opportunity – he could start by reversing or at least drastically reducing his tax credit cuts. But more importantly, his entire government needs to start seeing poverty the right way round, rather than from a position some way through and to the right of the looking glass.