I can’t remember a worse day in British politics than October 4th, 2016. Today ranked far below even last year’s general election, when 49 of my party’s MPs were defeated, and June 23rd, a date I thought had established itself as comfortably the worst domestic political event of my lifetime.

I have spent the day in a state of bewilderment, anger, disgust and despair at the way the Conservative government is dragging the country into a disgraceful mire. They claim to base this on a single vote, a vote to leave the European Union, that was decided on a knife-edge – a mere 1.3 million votes out of 33 million. On the basis of this vote, they claim to understand what “the public” wants, and even what it thinks. Just look at tomorrow’s Daily Mail front page, if you can:

That is the prime minister of the United Kingdom of Great Britain and Northern Ireland, calling other people elites. Making up non-existent elites that you can then blame for the country’s ills is textbook fascism.

Of course, this also illustrates another fundamental problem the UK faces: a media that is not just supine but more than happy to promote this kind of language in the face of the truth.

And the truth is utterly stark. The government that Theresa May is running can now only be described as overtly racist. The policy announcements made today by successive ministers were worthy of 1930s Germany and, as UKIP MEP Patrick O’Flynn rightly crowed, redolent of his party’s 2015 manifesto:

The number of policies Mrs May is lifting out of the UKIP GE15 manifesto is astonishing. Almost like we are in power, but not in office!

The fact that his party’s leader Diane James resigned tonight after 18 days in the job is no more than a depressing footnote to today’s events. The spectre of Nigel Farage’s inevitable return no longer feels threatening given what the Conservatives have become.

Theresa May was the one who popularised the concept of the Tories as ‘the Nasty Party’. Now she presides over some of the nastiest policies ever devised in British politics. It started early this morning with the announcement on doctors. When I read this I didn’t expect it to be the least worrying policy pledge of the day:

That’s the Defence Secretary promising that in future military conflicts, British soldiers will no longer be subject to the European Convention on Human Rights. In theory this would mean they were less susceptible to investigations into battlefield behaviour and abuses. In other words, because they’re beautiful British troops, we should just trust that they’ll do the right thing and remove the external mechanism designed to hold them accountable (you know, the one that British lawyers helped to draft after the second world war). Thankfully, it seems that this policy is actually unworkable in practice, but it certainly kicked October 4th off nicely.

It warmed us up for Jeremy Hunt and Theresa May’s main announcement of the day:

Theresa May tells BBC foreign doctors will be allowed to stay "until further numbers [of home-grown doctors] are trained". Doc-exit in 2025?

You’ll notice I’ve left out the biggest problem with it. That is, naturally, that it is racist. There is no justification given for the policy other than their foreignness. That is simple racism. Explicitly discriminating against foreign doctors purely because they are foreign is unequivocally wrong.

Next up was Amber Rudd, the Home Secretary. She had a smart idea about cutting immigration too. Here it is:

No tweeting in the main hall but here's Amber Rudd announcing only some universities will be able to recruit international students #CPC16 pic.twitter.com/WDBoznpYoU

In case you don’t know, providing education to international students is one of Britain’s most successful exports. Our universities make a ton of money from it. That money massively subsidises British students, keeping tuition fees lower and helping universities plan their financial future.

Another irony of this particular policy is that evidence suggests a vast majority of the public understand the difference between student immigration and employee immigration, and think people coming here to study for a short period is a great thing. But it’s probably simpler for Amber Rudd to pander to racists.

That certainly seems to be the case for her other policy, a requirement for… well, here’s the Times headline:

Firms must list foreign workers. And if they don’t employ enough British people, they will be ‘shamed’.

Can the Tories even hear themselves saying these things? Surely this runs counter to all their instincts. Even if we’re only talking about being pro-business – the most mercenary of all possible considerations – this is going to be a nightmare for everyone; enormous bureaucracy for no discernible purpose. Meanwhile a lot of the people who invest the most in our economy or have the best skills are foreigners – think of London’s tech industry, which is one of the world leaders.

But again, the real question for Amber Rudd and Theresa May is how they sleep at night. How do they live with themselves? This is bordering on fascism.

Speculation has raged since this announcement on how these pledges might be implemented. My money’s on yellow stars for the foreigners so they’re easy to spot. And for those unpatriotic firms with too many of the blighters, maybe the UK Border Force could smash their windows. I’m sure that would get the message across.

Last but not least in this parade of political putrescence comes our old friend, disgraced former minister Dr Liam Fox, who was forced to resign in disgrace until Theresa May graciously gave him a Cabinet role heading up all the non-existent trade deals we will try to strike after leaving the EU.

Liam Fox confirms refusal to give assurances to EU citizens in UK being used as negotiating chip, describes them as "one of our main cards"

It was pretty difficult to identify the most egregious moment of this spectacular shitshow, but I think this statement by Fox takes the prize. We already knew that May’s government had not ruled out using EU citizens in the UK as a negotiating tool, but this particular description betrays how infantile these people are.

Fox really appears to feel hopeful about the tricky – to put it lightly – negotiation the government has to perform with 27 other EU member states. And one of the ‘main’ reasons for this hope is the number of EU foreigners living in the UK. And the reason Liam Fox is hopeful is that the British government will be able to threaten other countries about the future welfare of their citizens.

Consider that there are 3.2 million EU migrants in the UK at present, around 5% of the population. Let’s assume you know 100 people. 5% means you almost certainly know some of these people personally. They almost certainly go to the same school as your children. Depending on where in the country you’re from, there’s a not-insignificant chance you might be friends with them or your relatives might be married to them.

If what Liam Fox said does not disgust you, appal you, and make you sick to your stomach, then I don’t really want to know you.

Some final thoughts. I am angry. I want to do something to stop this awfulness from continuing and succeeding. I intend to use the minimal tools at my disposal to do so. That means campaigning for the Liberal Democrats, even from afar, and supporting all other ways I know of to fight this danger, including trade associations, independent (and sane) media, and online debate.

You might be wondering what Labour were doing all day. A lot of other people were too. Surely, on a day of such infamy and disgrace, they would stand up as the opposition the country needs? Especially after Jeremy Corbyn chose to defend immigration at their recent conference?

Eventually they tweeted this:

The Tories have broken their own promise on immigration #CPC16 pic.twitter.com/kxZ5a0IPDR

As a fellow Lib Dem on Twitter put it:

I couldn’t have put it better myself.

If you are anywhere near as angered by this litany of disgrace as I am, then please join the Liberal Democrats, today, and help us campaign. David Cameron’s resignation has caused a by-election in Witney on October 20th. A victory for the Liberal Democrats would send the loudest possible message to Theresa May and her pernicious ministers that this approach to Brexit and to government is completely unacceptable. 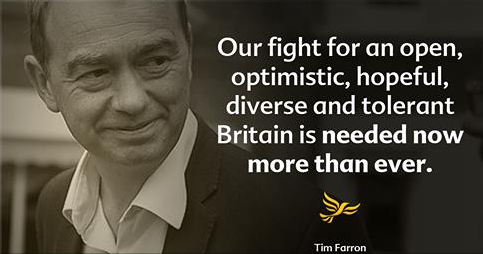